Today I was going through old pictures and came across some of our dog PJ.
Last September my family lost PJ, as some of you may know.  We were all sad, but it hit my dad, Paul, especially. You see, they were best friends. Since there was no funeral I wanted to help ease the pain but didn't really know what to say. So I wrote a eulogy for PJ to give to Paul. He was the kind of dog that deserved a eulogy.
Anyway, it was one of the things I found hidden in my computer and since it was delivered and read months ago, I decided I would share. For any of you that ever had a doggy soul mate... 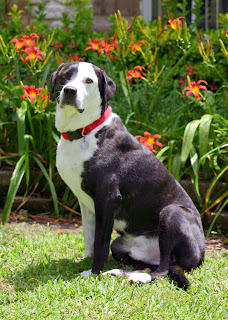 PJ was the kind of dog that you only come across once in a lifetime. He was like the ones in the movies, with almost human like qualities. As a matter of fact, I’m pretty certain PJ understood when we talked to him. Even if he did not, he understood love and kindness and he repaid those emotions tenfold.
I remember when PJ came to the shelter I was volunteering at while I was in high school. My parents were allowing me to foster puppies at our home until they were adopted. PJ, then named because the shelter crew thought it looked like he was wearing pajamas, was one of the puppies we fostered.  He was a sweet soul from the beginning and it didn’t take long for him to win my heart.  My parents finally agreed that if he wasn’t adopted at that weekend’s event, we could keep him. I did my best to deter every interested party, discussing with them all kinds of controversial issues about owning a pit bull. In the end I won out and brought PJ to his forever home with my parents. Initially, it was me who insisted to adopt PJ but looking back, it is clear that he was never actually my dog. He was destined to be with Paul.  Even his name was a perfect fit and mom often joked that now is stood for “Paul Junior,” he was Paul’s doggy soul mate.  If you don’t believe in doggy soul mates it’s because you have never been lucky enough to own a dog that is just that special. They wrap you up in their love and devotion and center their world around you. They don’t have to know any special tricks, I’m not sure PJ knew any other than sit. They usually aren’t heroes, often times they a mixed breeds that people rescue from shelters. And even though you aren’t sure from what, you can’t help but feel they rescued you too.
As I mentioned, PJ didn’t have a lot of tricks. He didn’t like water so he not a swimmer or a boat dog. He hated baths, thunder, and any ruckus in the kitchen caused by unloading the dishwasher or cooking dinner. When he first came to live with us he liked to dig holes in the yard and hoard things in them. He did enjoy a game of fetch in the evenings but really, PJ was just good and being a companion, mostly to Paul.
He followed Paul everywhere. Once he realized he was home he never tried to leave again. He was grateful and happy just to be a part of a family. PJ was a friend to everyone. He liked other dogs and he was extremely gentle with kids.  Even as he aged and started having hip pain, my kids would inevitable make their way to PJs bed and crawl all over him.  If it hurt him, he never let on. He was full of patience and kindness. Come to think of it he shared those qualities with his best friend, Paul. They were certainly kindred spirits.


Its always sad to lose a dog and especially hard when he’s a dog like PJ, it leaves an emptiness in your home where a wagging tale used to. But, in the same breath it fills your heart to know you got to be part of such a special bond and you provided a great life for such an amazing animal. When PJ found his forever home with my family I don’t think any of us knew that forever with him meant our lifetimes, not his. That’s just how long PJ will stay with us, if only now in our hearts and memories, he will be with us forever.
Posted by Terra Rhodes at Thursday, June 18, 2015 No comments: